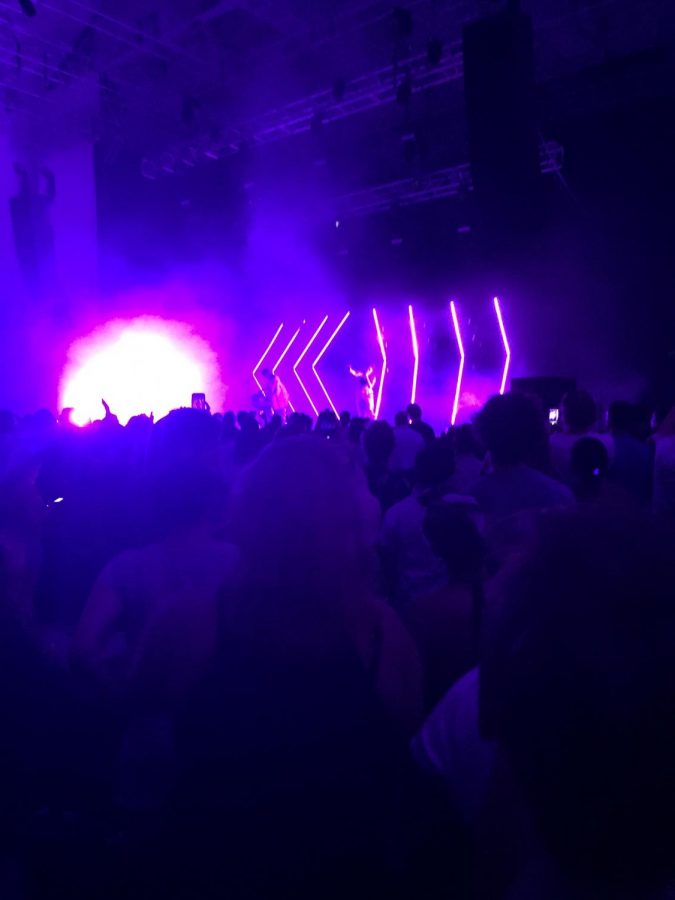 Whenever I find myself fed up with the pandemic, I flip back through my camera roll to concert photos and videos. One of my favorites to revisit is a show played by Sylvan Esso on July 28, 2018, at the Blue Hills Bank Pavilion in Boston. From the flickering, fuzzy opening song “Sound” to the smooth and soaring finale “Play it Right”, that night was transcendent.

On September 25, 2020, in a wildly different world, the electronic pop duo released their third album Free Love. It is available on Youtube, Spotify, and iTunes.
From Sylvan Esso through What Now
Sylvan Esso is composed of producer Nick Sanborn and vocalist Amelia Meath. They released their first album “Sylvan Esso” in 2014, married in 2016, and released their sophomore album “What Now” in 2018.

After touring through the summer and fall of 2019, Meath and Sanborn began working on their third album. Like everyone else, they were forced to change their plans by the onset of the COVID-19 pandemic. Instead of touring the country, they have spent the last few months shooting socially distant music videos and performing virtual shows from home.

In the evening of Thursday, September 24, Sylvan Esso premiered a two-hour collection of performances that they accurately described as “part gallery opening, part late-night telethon, part record release party.” Music video directors Cheryl Dunn and DL Anderson appeared to discuss their creative process. Viewers also got to hear the song “Numb” for the first time, accompanied by a dance improvisation by Emma Portner, who has also choreographed for Justin Bieber and Maggie Rogers. Nathaniel Russell contributed his visual art, and Merrill Garbus of the group tUnE-yArDs played a live DJ set to close out the evening.
Reviewing Free Love
To me, this album sounds more like lullabies and electropop experiments than radio hits. “Free Love” also leans farther into the lo-fi end of Sylvan Esso’s creative range than their earlier work. Listen carefully for the yells in “Ring,” the laughter in “Ferris Wheel,” the deep breath in “Make it Easy,” and the quiet chatter between Meath and Sanborn at the start and end of “Free”.

The song that stands out from the first listen is “Ferris Wheel”. It’s the only song on the record that I can honestly call bright and poppy and dancy, but it retains that same subdued edge as the rest of the album. There is positivity in this song, but it’s temporary and conditional: “You’ll do fine / for tonight.”

The next set of songs that caught my ear were actually some of my least favorites, “Ring” and “Runaway”. Both are incredibly catchy, but I can’t reconcile the elatedness in Meath’s voice on “Runaway” with the threatening lyrics (“see me running with my hands up”). I feel their instinct to make light of ever-present anxiety about gun violence, but the song still feels off to me, like perhaps it takes the lightheartedness too far.

My issue with “Ring” also stems from something about it just not fitting together. It begins with a frankly bewildering crash of drum kit sounds that still feels out-of-place, no matter how many times I listen to it. I still can’t quite figure out the lyrics, and the incomplete explanations that Sanborn and Meath have given don’t quite match up with each other. It sounds like many songs that tried and failed to all be part of the same one.

“Train” and “Numb,” on the other hand, succeed because they manage to make me dance and think at the same time. I’m in love with the way the deep, distorted voice under Meath’s vibrates in my chest during the song “Train”. This, in my mind, is Sylvan Esso’s self-aware critique of the music industry and the repetitive, relentless battle to come out on top. It’s less biting and direct, but definitely carries the same message as “Radio”, one of the top tracks on “What Now”.

“Numb” is a song with lyrics made for the quarantine blues. Although it’s not the rollicking dance bop that “H.S.K.T.” or “Radio” is, the rising synth in the bridge does get me rocking in my seat.

“Rooftop Dancing”, may be the best example to date of Sanborn’s production skills building a whole world out of versions of Meath’s voice and children’s jump rope songs. It’s a quieter song; a wave that’s cresting and never quite breaks. While songs like “Ring” begin to grate on me the more times I hear them, “Rooftop Dancing” only seems to get more intimate with each listen.

So does “Frequency”, the closest thing we have to a Sylvan Esso love song to date. When Meath sings “her voice bends if she smiles,” her voice bends. She smiles. These idiosyncrasies and images are bound together by the overarching idea that she, this wonderful love interest, is a “frequency” that the narrator is always tuned into. It’s too tender and joyful to ignore.

It’s Sylvan Esso tradition, at this point, to begin or end with a fuzzy, slow song made up more of voice and glimpses of sound than of rhythms. These songs are hardest to grasp but most valuable when you get down to their meanings. “What If” touches on climate anxiety and the sense that the world is changing drastically and permanently. Its ending directly addresses the listener in that songs-about-songs tradition that Sylvan Esso has: “It’s a memory bank / And it lives in our mouths / So open wide / She’s coming out.”

According to Meath and Sanborn, “Free” (another quiet one) is the heart of the album. It’s more poem than song. The lovely lyrics are vague enough to allow each listener their own meaning, but specific enough to say something true and real about the power and privilege of being seen.

The album comes down to rest on a gentle, introspective note with “Make It Easy”. This song feels like a wish, or a prayer. There’s a point when Sanborn’s synth static builds up to sound almost like an organ, loud enough to drown out Meath’s melody. It cycles back to the sonic chaos that “What If” rose out of. The repeated line “play it again” recalls “Play it Right,” the song that created Sylvan Esso back in 2013. Lyrics and rhythms and compositions all return not only to the beginning of the record but to the beginning of the band, and I love that.

All songs considered, I am happy with this album. It delivers a dance song in the vein of hits like “Coffee”, a more satisfying love song than “Die Young”, and a lullaby as soft as “Come Down”. Although there are moments and meanings that miss the mark, Sylvan Esso has grown into their personal side and their full emotional range.

I don’t think that the radio, the charts, or any new sections of the audience for pop music will pick up this crackly, thoughtful record. It’s the longtime fans who will listen long enough and hard enough to fall in love with Free Love. And someday, I know I’ll be “slamming in my dancing shoes” at another Sylvan Esso concert in person.