The Met Gala Returns, and So Does the Questionable Fashion

Every year, on the first Monday in May, celebrities flock to the Metropolitan Museum of Art in New York City for an exclusive fundraising gala. Tickets, which today cost $30,000-$50,000 a piece, fund the Costume Institute’s annual fashion exhibit. The theme of the event matches the theme of the exhibit, and many of the celebrities’ gala outfits can be viewed in the exhibit itself. Previous themes have included “Camp: Notes on Fashion”, “Heavenly Bodies: Fashion and the Catholic Imagination”, and “Manus x Machina: Fashion in an Age of Technology”.

The Met Gala was established in 1948 as a simple fundraising banquet, but it has since become one of the most exclusive events in fashion. The gala was canceled in both May 2020 and May 2021 due to restrictions and concerns of safety during the COVID-19 pandemic. However, instead of forgoing the 2021 gala altogether, this year’s event was postponed to September 13, with hopes to resume the May galas in 2022. That means we finally got to see the notoriously innovative and avant-garde fashion that the gala promises after a nearly year and a half absence.

Every year, the event is co-chaired by some of the most influential celebrities in fashion and beyond. This year, the chairs were some of the youngest to hold this honor, with actor Timothée Chalamet, singer Billie Eilish, tennis player Naomi Osaka, and poet Amanda Gorman appointed for the September gala.

This year’s theme was “In America: A Lexicon of Fashion”, and, like the previous themes, was interpreted in many different ways by different designers and celebrities. While the internet was unanimously disappointed by some celebrities’ outfits, as well as by the absence of gala regulars like Zendaya and Blake Lively, here are some of the most show-stopping looks from the 2021 Met Gala. 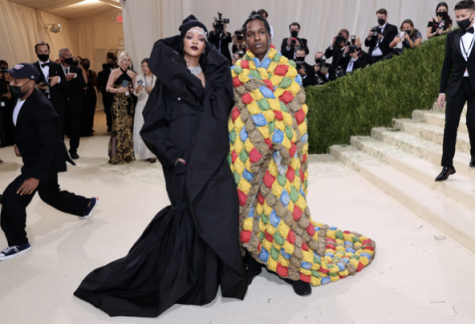 Rihanna’s yellow gown from the 2015 Met Gala is arguably the event’s most iconic look to date. This year, she chose an extravagant Balenciaga overcoat. She arrived fashionably late along with A$AP Rocky, who donned a memory quilt-inspired cape by ERL paired with a simple black Tuxedo. 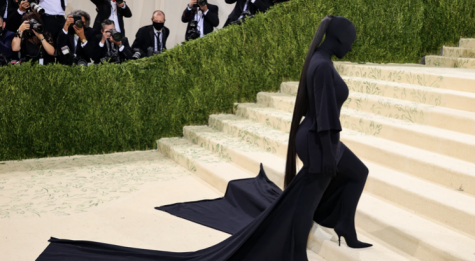 One of the most shocking looks of the night came from Kim Kardashian, who wore head-to-toe Balenciaga, literally. The full coverage black outfit was complete with a ski mask-like face covering, obscuring her identity. 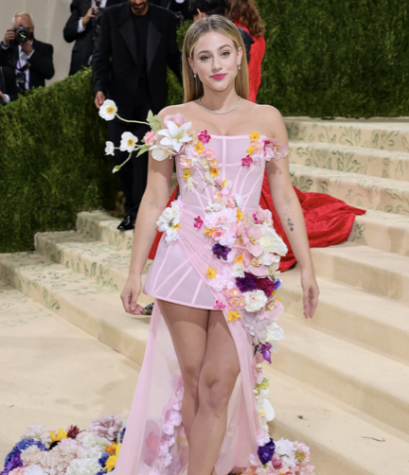 Lili Reinhart arrived at the gala in a sheer pink corset dress designed by Christian Siriano. Fitting the theme, the flower appliqués represented the state flowers from all 50 states. 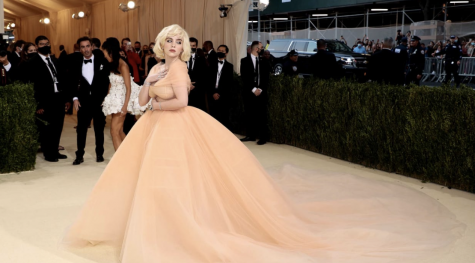 Event co-chair Billie Eilish is known for her baggy, oversized fashion, but she stunned in an Old Hollywood inspired peach ball gown with a corset top and tulle skirt at the gala. Before agreeing to wear the Oscar de la Renta gown, however, Eilish, an outspoken vegan, got the fashion house to agree to be fur-free going forward. 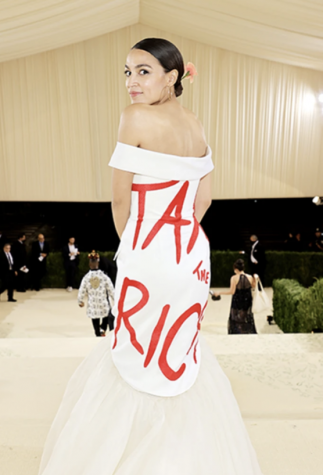 Congresswoman Alexandria Ocasio-Cortez’s politically charged Met Gala gown caught a different kind of attention than Eilish’s look. Her white gown was completed with the phrase “tax the rich” written in big red letters on the back. AOC has faced immense backlash, both for attending the event and the hypocrisy of the message when the event itself features the wealthy.

Regardless of your opinion on the matter, she certainly turned heads.