Every sport – from baseball to basketball, to football and hockey, to tennis and lacrosse – requires physical skill and exertion. Endurance, strength, agility, flexibility, and hand-eye coordination are some of the ultimate demands of being a successful and competitive athlete. However, there may be no sport more demanding of such skills than Malaysia’s sepak takraw, also known as “kick volleyball,” which takes athleticism to the extreme.

Originating in Malaysia around 500 years ago, before rapidly gaining widespread popularity in Southeast Asia, sepak takraw is a fast-paced, gravity-defying hybrid between volleyball and soccer. The sport features two teams of three people, each with a designated server, setter, and spiker, who compete to pass a grapefruit-sized woven ball over a 5 foot net in three touches without allowing it to touch the ground. Traditionally, the first team to reach 21 points in two out of three sets wins.

Where the game really gets interesting is that players cannot use their arms or hands to hit the ball, which typically leads to them to acrobatically twist and flip in the air to kick the ball with their feet. Some of the most advanced techniques players use include what’s known as a horse kick serve, sunback spike, and roll spike.

The horse kick serve, which is used to first put the ball in play, features a high kick in which a player strikes the ball backwards over their shoulder. A similar motion is used for the sunback spike, only it is performed in a jump with one foot pushing off the ground and the other kicking up towards the head. Differing slightly from the technique used in the horse kick serve and sunback spike is the roll spike, which requires a player to complete an airborne flip in which one foot is used to kick the ball over their opposite shoulder in the direction that they are flipping. 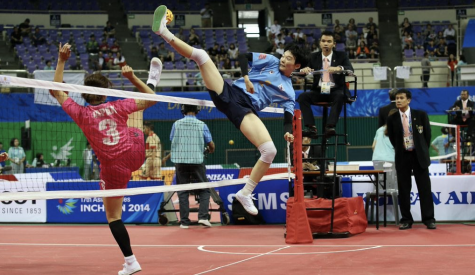 Creative Commons Image of Players Competing in Sepak Takraw https://www.flickr.com/photos/koreanet/15291705581
While such techniques  are fascinating to watch, Southeast Asia considers sepak takraw as more than just an exciting sport. In addition to being entertaining, sepak takraw holds great historical and cultural significance, dating back to the royal courts and the exile of Raja Muhammad, who was heir to the Melaka throne. Thus, the spread of the sport across countries is a method of cultural diffusion, bridging differing communities through a commonly shared experience.

The U.S. sports channel All Sports Television Network is facilitating this spread of culture with the help of Astro, a Malaysian satellite television provider. Through this partnership, events from international, national, and regional sepak takraw tournaments will be broadcasted for the first time to American audiences.

The President of All Sports, Roger Neal Smith, and the Head of Sports at Astro, Lee Choong Khay, have expressed equal enthusiasm for the sport expanding platforms and reaching new viewers across the world.

According to Astro’s website, Smith stated: “We are truly thrilled to introduce sepak takraw to the American public. Broadcasting the matches further accomplishes our goal of opening the sporting world doors to American fans, which allows them to begin experiencing events from around the world.’” Khay also added “We’re excited that this spectacular sport is gaining the international recognition that it deserves.”

With our love of sports as Americans, there is no doubt that we will soon be enthralled with sepak takraw. Furthermore, with it’s growing recognition, it may not be very surprising  if we soon see sepak takraw taking the stage in future Olympic Games as a major international sport.